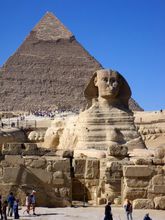 There is an animal, it has the head of a human, a body of a lion and sometimes the wings of a bird. Are you familiar with it? It’s the Sphinx, a mythical creature. It’s from the ancient Greek, but now famous in Egypt.

People always say, if you have not visited the pyramids one of Seven Wonders the world, you can’t say that you have been to Egypt. On the east side of the pyramid is located the Sphinx one of the most wonderful icons of Egypt, which attracts tourists from all over the world with its attractive magic.

In ancient mythology, the sphinx was a monster. The head of a man, the body of a lion, and his wings, called a sphinx. Sphinx was born cruel, and he learned many riddles from the Muse of the wise, often at the crossroads. Every pedestrian wants to pass, must guess the riddle. If the answer is wrong, Sphinx will completely take the people at lunch. Once a king’s son was eaten by a sphinx, and the king was so angry that he offered a reward- “who can answer the riddle right, give him the throne!” A brave young man got revenge. He walked away and came to Sphinx. 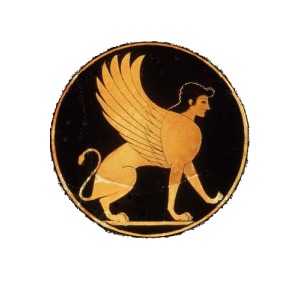 “Guess the riddle, young man.” Sphinx took one of the hardest riddles to guess. What is it, walking on four legs in the morning, walking on two legs at noon, and walking on three legs at night? “It’s human.” The wise young man quickly guessed it. And finally, Sphinx committed suicide to redeem his sins.

You should know, unlike the Greek Sphinx, which was a woman, the Egyptian Sphinx is typically shown as a man. It was viewed as benevolent, but having a ferocious strength similar to the malevolent Greek version.

GS-JJ has a new design for custom medals, It’s a Sphinx,  shiny surface and with the Sphinx statue in the middle, lion body and a woman face and the wings. And our medal designer uses the Greek words to spell “Sphinx” under it.

GS-JJ creates this gold medal with Sphinx is look like a beautiful woman, and her paw is catching nice china. From the above pictures for a medal, you may see it’s really amazing craftwork and wants to drop the order to us. If so, don’t be hesitate to contact us.