Jurassic Park, released in 1993, opens with an ancient world both unfamiliar with and familiar to us. In today’s modern jewelry design, the Dinosaur kingdom has become a common theme of creation. A number of Jurassic Park designs have emerged. Designers have not only creatively interpreted the image of dinosaurs, but also instilled multi-level meanings and ideas into them. Now let me enjoy these incredible designs.

When creating the bracelet, designers face two challenges at the same time: they must discover, or even invent, the connection points between ancient and modern times. Then there is the most basic problem. These jewelry pieces should be worn by people and should be made contact with future owners and viewers.

“Jurassic Park” is not only a vivid and interesting restoration of the dinosaur world, but a lot of design works can also be disassembled. It can be worn as a bracelet as well as a creative home accessory. These works often express very human emotions, such as embarrassment, frustration, and anger. In addition, works often use animal presentations to discuss public issues.

Some scientists believe that meteorites hit the earth are to blame for the dinosaurs’ demise. Whichever causes the extinction of dinosaurs, the principle is the same: the environment in which they live has changed dramatically, and if it is not stopped and protected, humans will eventually end up the same way as dinosaurs.

Brachiosaur as a “giant” species on earth, designers in the creation of time did not create a sense of a bully. It’s rather funny and cute. The dinosaur’s head was crowned with a UFO full of aliens. The green wool weave of the aliens funnily expressed their thinking about the environment. The UFO was taken apart and turned into a breastpin, always reminding people to reflect on the real world and the way of life of modern people.

Hong Kong jewelry maker “OOO Workshop” turns childhood memories into unique odd earrings. The designer cut the Vintage Plastic dinosaur toy in half and put a stud in the other half so that your ears will be sandwiched between each side of the body of the “ancient reptile”. This approach makes it easy to mix and match. Also, it’s an interesting way to create your own dinosaur race. OOO Workshop offers a variety of ear studs, including Triangle dragon, sword dragon, Tyrannosaurus Rex and Thunder Dragon. Guide your inner innocence, let you once again find the craziness of creativity.

I first met GS-JJ Custom Pins when I searched for Custom pins on Google. A set of exquisite dinosaur badges caught my eye. These GS-JJ’S dinosaur Custom Pins are full of childlike interest, retro charm. It’s hard to forget! And I began to have a strong curiosity about where these dinosaur lapel pins came from and how they became ornaments. 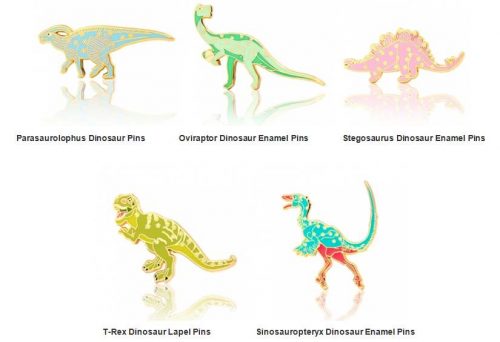 Although this “dinosaur” theme is very interesting, the dinosaur world has long since disappeared from our reality. Therefore, every step of the designer’s creation is accompanied by her deep study of the age of dinosaurs. The designers cleverly used dinosaurs to present a discussion of public issues, creates artistic work that has a unique interest and a sense of humor. These art accessories are wearable art, so the size of the art is usually small. When people see them, they cannot ignore the existence of these works, and there may be many topics as a result.