Salute to Those Who Have Never Been Forgotten

–Salute to traditional festivals by custom pins: For Day of the Dead

For New Yorkers, Parisians, or Londoners, death is something they would not easily mention because it will burn their lips. But Mexicans often talk about death. They tease it, sleep with it, and celebrate it. Death is one of Mexicans’ favorite toys. It is the eternal love of Mexicans.

The best way to let customs & culture be “alive” is to combine it with the daily life of the people. The Day of the Dead, a traditional festival of Mexican with all their eyes on, is a good design theme. Our designers salute to the classic culture by the custom pins design. They designed a series of custom pins with cultural color for Day of the Dead. When you touch them, you will feel the breath of culture deeply. 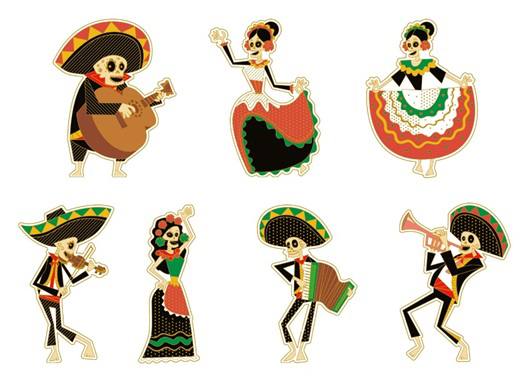 The series of Custom Pins for Day of the Dead

The movie “Coco” was first released in Mexico on October 20, 2017 (two weeks before Day of the Dead). In the background of Mexico’s unique culture, it tells a story about death, dreams, love, and family. It touches us who are thousands of miles apart and culturally different.

Actually, the movie’s story is simple: on Mexico’s Day of the Dead, a music-loving boy, Miguel, broke into the World of the Undead by mistake despite his family’s opposition. As an expected result of the movie, he has both sought out, come true to his dreams, and unveiled his family’s secrets.

The most fascinating things about the movie are the colorful World of the Undead and the amazing open-mindedness of Mexicans in the face of death. “Day of the Dead is a festival we celebrate for those who are no longer with us,” wrote in the “Knowledge of Citizens”, Mexico’s fourth-grade elementary school textbook, “This is not a sad festival. On the contrary, it is a holiday full of colors. ”

Day of the Dead is a festival for Mexicans to pay respects to their relatives and friends. Originated from the ancient Mexican indigenous Indian culture, after the Spaniards came to the New World in the 16th century, Western Catholic “Halloween” combined with the ancient Indian tradition of offering sacrifices to the dead, thus both them gradually formed the “Day of the Dead.”

Of one accord, people all around the world believe that the soul will never die after death. But as Octavio says, we don’t talk about death so easily that it’s too serious to be associated with grief, depression, and fear.

Unlike the serious and heavy attitude of the people of most countries towards death, it is a “happy” festival for Mexicans. They dress up the sacrificial tables of the deceased, gather in the cemetery to play music, dress up as skeletons and revel in the streets. They filled the sacrificial tables with sugar skulls and marigold, sowed marigold petals and leaves to guide the deceased relatives and friends home, and they even held a lively concert!

In addition to recalling the deep memory of the deceased, they believe that death is not the end of life, but the reunion worthy of revelry.

Turning to the movie, it began with the annual traditional festival of Mexico, Day of the Dead. Countless people who are worshiped and remembered by their friends and families flocked from the World of the Dead, they went across the golden bridge forming by marigold petals together, waiting to return home and meet their loved ones.

Everything is as natural as what they experienced during their lifetime. On the boundary between life and death, people still have to go through the “customs”.

Even the skull has big eyes and long eyelashes, and they can perform the “startled chin” of the real “human” occasionally. How can people, even those children be afraid?

Because of not being afraid and closeness, people are more likely to accept the values that the movie conveyed: the people who deceased are not lost forever but live a better life on the other side of the world in a different form. The operation rule of the World of Undead is nothing else but the memory of the living people.

In Mexico culture, people have three times of death: the first time is when your heart stops beating, you are biologically condemned to death; the second time, your social status disappears with people bowing at your funeral. But only the third time, when the last person in the world who has your memory forgot you, it is the real death.

From the beginning with a cry, everyone inevitably goes to death. When death really comes to those around us, does it leave us only the darkness, despair, and sadness?

At least, in Mexico’s Day of the Dead, the end of life is warm, and death becomes a full carnival. “Remember Me”, the theme song of “Coco”, is also a warm song for all the dead and living.

“Remember me, though I have to say goodbye.”

Death is far from the end of life. Those deceased relatives and friends will also wait for each year’s Day of the Dead to meet us and to quietly accompany our growth in another world, to care for our joys and sorrows, and to give us all the best wishes.

Let’s go through time and space to Mexico’s Day of the Dead and immerse ourselves in such a warm death imagination with them. In this spiritual space, we are able to meet our deceased relatives and friends, heal and rethink “what is eternity” within ourselves.

May each of us are the exclusive memory of those we love.

♪ ♩ “Remember me though I have to say goodbye

Remember me don’t let it make you cry

4
Give a good point