Every time I watch the “2 Broke Girls”, I am deeply attracted by the cupcakes made by MAX, and I always have a feeling of drooling, because the cupcakes look really beautiful and tasty. Later I find that we just need seven steps to make our own cupcakes.

The cupcakes are so cute and lovely to remind people of the fairy tales, they are also commonly called fairy cakes in Britain. 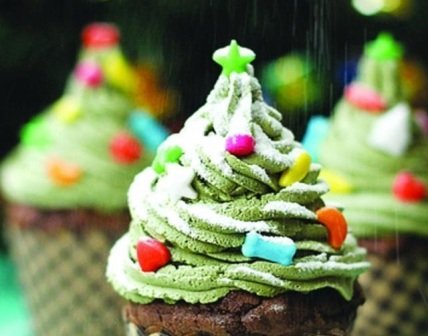 Compared with exquisite French desserts, Cupcake is full of Americanism-simple, free, and full of happiness. Cupcake is part of American life, and also the easiest dessert to make. The housewife took out the fresh and tasty cupcakes from the oven, and their kids could not wait to let these cupcakes cool; they burned their hands and ate the hot cupcakes. After growing up, Cupcake becomes the gift for a friend, the comfort to us, and also the nickname to call our lover.

The reason why people love cupcakes is that of its ultimate shape. Not to mention an artwork-like sugar-pasted cupcake, just the basic type wrapped in cream is enough to make people covet it for a long time. Pleasing to the eye and pleasing the taste buds, the positive energy is bursting instantly.

Although not everyone is a baking master, we can also make delicious cupcakes. Let’s have a look at the seven simple steps to make our own cupcakes now.

Just a few steps, you can eat your own cupcakes. Is it very simple?

However, if you are worried about the high calorie of the cupcakes, the high-calorie food will indeed make you fat, you are still really fond of the beautiful appearance of the cupcakes and you want to see the cupcakes every day.

You can tack your creative cupcake Custom Enamel Pins to your bags, your denim jacket, or as your Hat Pins every day, and then you can see your favorite Cupcake all the time.

About us, GS-JJ is an experienced and reliable custom enamel pin manufacturer with a wide selection of cool enamel pins, unique lapel pins, and antique pins.